[OUT OF THIS CITY] ON SERVING TIME: FRID

With deeply emotional delivery and stimulating lyrics explaining his life journey and the struggles he encountered growing up, Manchester-based MC Frid’s E.P. Serving Time is an impressive autobiographical journey. The honesty and authenticity touched me as a listener, and I wanted to find out more about this character.

Despite being so open with his words and the content being fairly unambiguous on Serving Time, I felt like I wanted to know more about Frid, his motivation behind the E.P., and his views on the music industry. After a rather strange ten minutes spent talking about how awful I am with understanding accents and how untidy my room is, along with accidently insulting my interviewee (I may be a writer but I am terrible with words!), I got down to business with Frid… 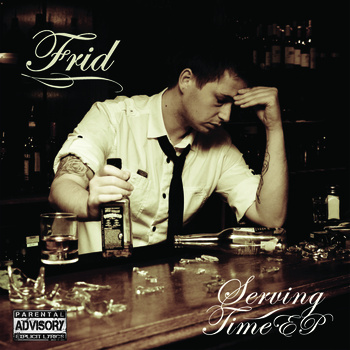 Georgina: What was the inspiration behind the tracks we hear on Serving Time?

Frid: It sounds a bit corny, but it is basically an autobiographical E.P. detailing my life from being about two years old, to now. There are certain subjects on there that are very personal, especially Dear Daddy and Serving Time. When I recorded Dear Daddy in the studio, I struggled. It was really hard for me to record and is still hard for me to listen to. I suppose the inspiration behind the E.P. is me, my life. The tracks on the E.P. are in reverse-chronological order of my life, so they start at the present day, and go back to the start, which was intentional.

Georgina: It took me a few tracks to actually realise that it was in that order, but when I did notice it I thought it was a really cool idea.

Frid: Yeah, I didn’t expect people to realise straight away, and I’m fully aware that it is a bit of a random idea! One of the tracks, Inside Rhymes, might seem like a haphazard track full of wordplay and punchlines, but it does still fit in with the idea of the reverse-chronological order. The things I mention in that track are born of a mindstate that I was in around the time I was sixteen or seventeen, you know, far more likely to say something shocking or offensive; just generally being an inexperienced youth. People might take offence at that track though, and that’s part of the attitude I was in around that time in life – an ‘I don’t care if you hate me’ battle stance.

Georgina: What is your favourite track off the E.P.?

Frid: That’s a really difficult question. Frankly, I don’t know. Obviously, I like them all – they’re my musical babies – but I’d probably say Dear Daddy and Serving Time are my two favourites, just because they mean so much to me on a personal level. They were very difficult to tackle. Serving Time touches on things that that nobody ever knew about me before, demons that I struggle with on a day to day basis, but also shows the drive I had – and still have – to fight that. It also name checks my daughter, which I wasn’t initially intending to do, so that’s another reason I like it so much.  Dear Daddy is twenty-five years of emotion in one song. I don’t talk about my dad openly to anyone other than my mum and best friends really, so the song had to be perfect. Recording it was extremely emotional – and what makes it even better is that people have told me that they relate in different ways. That kind of helped me realise that people are in similar situtations and I’m not just an emotional wreck!

Georgina: What’s the best advice you’ve ever been given?

Frid: Hmm, probably any advice that my grandad or mum ever gave me. They were big influences on my life, especially seeing as I grew up not having a relationship or bond with my dad. My grandad and mum always told me to do things for myself, not for others, you know, not to try and fit in for the sake of it, and to do whatever made me happy. That took me a while to learn, and I spent a lot of time trying to please other people by fitting into their mould and looking for acceptance. I think I’ve finally learnt though, and it’s something I’ll always carry with me and pass onto my daughter.

Georgina: As an MC residing in the north of England, is it a challenge trying to make it in the ‘urban’ scene, which is almost entirely based in London?

Frid: Absolutely. One-hundred percent. I know this is going to sound really corny again, but I always think that if you want something enough, it will never be impossible. However, it is difficult being a northern MC. I’m not putting down anyone who capitalises on it, but I think it is easier for someone from London, or the south of England, to gain a fanbase. There are more hip-hop heads, more live nights and there seems to be more people who are willing to give new artists a listen. The scene is just naturally bigger. Also, obviously we northerners have a completely different dialect. Let’s say, for example, you put me up against Tinie Tempah or Professor Green. In a metaphoric race to blow up, they would win hands down, because the south – especially in UK hip-hop terms – is just much more acknowledged by a wider audience than the north is. I actually had a chat with someone who listened to my E.P. who was from my area and even they mentioned that they didn’t like my accent. They used Professor Green as an example of a ‘less harsh’ southern accent. I think he’s got an even harsher accent than me! But that’s something that was already more familiar to her, so she viewed it by default as ‘less harsh’.  In UK hip-hop there are also a lot of stupid unwritten rules, like how you should look, how you dress or talk. It’s like you always have to be wearing the right jeans or a hoodie or the right brand of trainers. It’s silly because hip-hop was never really about image; it was about music and lyrics and a movement. Now it seems to be the opposite, and if you’re not wearing Ray-Bans and a cocked hat, you’re not fitting in and instantly get no love before you even open your mouth.

Georgina: Wow, deep answer. But I don’t disagree with some of it. Why did you choose hip-hop then, considering how you feel about the industry?

Frid: Well I never really calculated that it’d happen, yet I didn’t fall into it either. Hip-hop was the music I listened to. Hip-hop struck more of a chord with me because I started noticing it around the time I started getting old enough to really understand the stuff I’d been through and all the past pains and that. The artists seemed to talk about things in a similar way to the way I thought and that was in a far more forthright way than artists from other genres would. Rather than disguising the emotion like you’d maybe get in an indie song or something, MCs just come straight out with ‘I hate my Dad’ or something. I also like playing with words, and rhyming and I’d like to think I have a bit of a knack for it!

Georgina: Which UK based artists do you think are going to blow up this year?

Frid: I think Genesis Elijah can only get bigger.

Georgina: Yay! I love him. Who else?

Frid: I reckon Lowkey could certainly dominate both sides of the Atalantic, though he talks about not wanting to blow up, eventhough he kind of already has! People need to listen to more northern MCs as well, like Dialect from Kilamari Records, Spee69, Lego to name a few. Uppacut, who has recently become affiliated with my own Wenlock Music imprint, is another one to look out for. His album Swindlers List is sounding ridiculously good. And I’m not just saying it because it’s our release or because I’m on it, it really, really is hotness. It’s actually an honour to have him even affiliated with the label, let alone being one of the label’s artists! His pedigree and talent is immense. I’m a fan more than anything.

Georgina: Finally, what are your plans for the next few months?

Frid: I am about to record the video for the single Serving Time, and I have a really cool concept for that, so I’m excited to see how that one is going to pan out. I hope that’ll be out by the end of March. I’ve started work on a new solo E.P., which will be shorter – perhaps three or four tracks. That’s going to be the ‘closing off’ of Serving Time. Almost the end credits of the movie. I’m also working on a joint E.P. with Uppacut which should be awesome. The man is a beast! He’s sent me about a million instrumentals for this project and all of them are insanely good. I started writing for that about three weeks ago and we’ve already got three or four keepers in the locker in my opinion. The recording sessions for that will actually start next Sunday, so I’m looking forward to it. As well as that, there is obviously the Uppacut album to push. Aside from that, to be honest, I’m not looking any further than that at the moment, and making a conscious effort to make sure the quality is there and that there is no filler. Hopefully it’ll all make the impact that we want it to.